Located in the beautiful grounds of the Schonbrunn Palace, the Wagenburg museum houses more than 170 different vehicles, amongst which there are carriages, sedans, sleighs and even a car that have belonged to different historic figures over the years.

Through these carriages, the music tells the story of Austria's fascinating past, allowing you to learn all about the lives of the people whose travelled in these vehicles, including Maria Theresia, Franz Joseph I and Empress Sisi.

The museum's permanent exhibitions also include one dedicated to the 'Queens of Hearts' of the 20th Century, which draws parallels between the beloved Empress Sisi and Princess Diana.

The most important carriages

Amongst the Imperial Carriage Museum's most important pieces on display are the Viennese court's funeral carriage, as used by Empress Sisi, the tiny children's car used by Napoleon's son, and the only surviving court automobile from 1914.

As well as its lavish vehicle collection, the Imperial Carriage Museum highlights the truly indulgent lifestyles of the Austrian nobility displaying other pieces such as luxurious clothing items and accessories. A truly interesting insight into the history of the country! 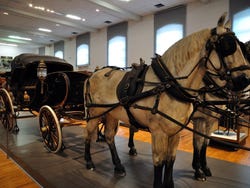 Inside the Imperial Carriage Museum 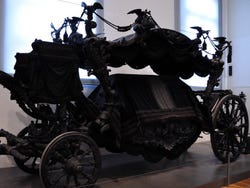 Hop On Hop Off Bus Vienna