The Durnstein Castle ruins, Melk Abbey, the Krems wine-making region and the stunning Danube and Wachau valleys make this day trip one of the most popular excursions from Vienna. Enjoy a different side of Austria. 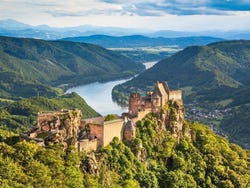 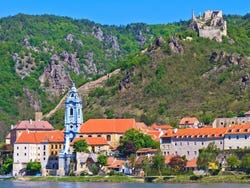 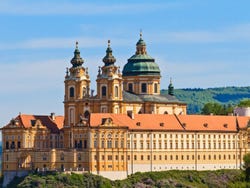 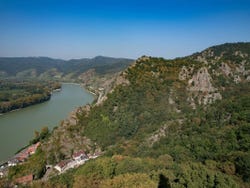 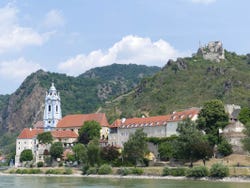 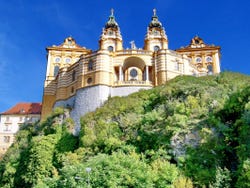 After meeting in the city centre, you'll leave Vienna behind and explore its beautiful natural surroundings. Discover the ancient towns, sloping vineyards and spectacular scenery of the Austrian countryside.

You'll pass the famous Medieval ruins of the Durnstein Castle, where, according to legend, Richard the Lionheart was held captive and later freed by his faithful squire Blondel.

Next, you'll enjoy a boat cruise on the Danube River, allowing you to delve deep into the heart of the Wachau valley, travelling from Splitz to Melk, and passing the Krems wine-making region. Thanks to its fascinating history as well as its stunning beauty, the Wachau valley is recognised as a UNESCO World Heritage Site.

The city of Melk will be the final stop on your tour. In its very small area, this city has an impressive variety of architectural styles from many centuries, and its highlight is undoubtedly the massive baroque Benedictine monastery, Melk Abbey. If you'd like, you can visit the monastery on your own with an English audioguide.

The tour will end around 5:30 pm, returning to the original meeting point.

The boat trip on the Danube only runs during the summer, from mid-April to the end of October. When the boat ride is not running, you'll have lunch included instead.

You'll have around 60 minutes of free time in Durnstein, as well as an hour and a half river cruise and some 30 minutes in Melk. When lunch is not included, you could make the most of any of these moments to grab a bite to eat at your leisure.

The multilingual guide will accompany you during the bus tour. There will be no guide on the boat trip.

Disinfected radio units will be provided, and headphones will be single-use.

The activity takes place with a guide that speaks in english.

Boat trip (from mid April to end of October)

Lunch (from end of October to mid April)

You can book up until 10 hours before the activity as long as there are still places. Book now to guarantee your spot.

Most areas are accessible.

All services published on Civitatis are carried out in accordance with our Sustainability Code. Specifically, this activity applies the following practices: Show more

US$ 99.30
No hidden fees or surcharges
Free cancellation up to 24 hours before the service starts
Book

Super good the spectacular guide, he was a lot for us, very good. Opinion translated. Show original.

Fantastic day trip. With Juana, our guide, we visited a small medieval village, then we took a boat trip down the Danube to Melk and had two hours for lunch. At 3:00 p.m. we did the guided tour of the Abbey and, finally, we returned to Vienna. Worth. Opinion translated. Show original.

Very good excursion. The guide was very nice, he spoke many languages and although the excursion was with people from different countries and languages, he gave the explanations in all of them very well. For the rest, I recommend this excursion to everyone Opinion translated. Show original.

I travelled by myself
8

The guide, Erik, explained himself great and treated us very well. A 10 for him. If we haven't tipped him, it's because the tour is already quite expensive, but he deserved it. Opinion translated. Show original.

I travelled with my partner
Show all the reviews
like Free

9.30 / 10 188 reviews
Let the charm and history of the Austrian capital seduce you. Explore Vienna's most iconic monuments on this free walking tour.
Free!
Book
like

9 / 10 69 reviews
Discover the small town Hallstatt, one of the most enchanting locations in Austria, with this full-day trip from Vienna. You'll also take a boat tour around Lake Hallstatt.
US$ 140.70
Book
like

8.70 / 10 425 reviews
The Vienna Pass allows free access to more than 60 attractions in Vienna, including the Schönbrunn, Hofburg and Belvedere palaces, Mozart's house and much more.
US$ 93.40
Book