The Austrian National Library is one of the world's most beautiful historic libraries, and it is the largest Baroque library in Europe. Emperor Charles VI ordered the construction of the architectural jewel in the 18th century for its use as the Imperial Court Library, as it was known until 1920.

The main room of the Austrian National Library is the Prunksaal, or State Hall, an impressive room that is more than 230 feet (70 m) long.

The enormous room, a splendid example of Baroque architecture, is filled with marble statues and crowned with an incredible dome decorated with stunning frescoes. The beautiful chestnut wooden shelves that line its walls are packed with more than 200,000 books from between 1500 and 1850.

Amongst these books, you'll find the extensive 15,000-volume collection of Prince Eugene of Savoy, as well as numerous different books from monastic libraries that were closed during Joseph II's religious reforms.

The Austrian National Library has more than eight million books, amongst other objects on display in its different museums, including the Papyrus Museum and the unique Globe Museum, making it one of the world's most important libraries.

This incredible library in a stunning setting is well worth a visit, and its location right in the city centre makes it an unmissable stop on your trip to Vienna. 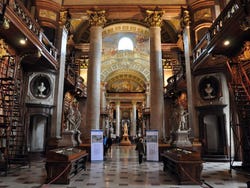 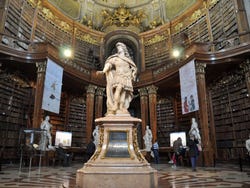 Metro: Herrengasse, line U3; Stephansplatz, lines U1 and U3.
Bus: Albertinaplatz, line 3A.