The Ringstrasse is a circular boulevard that surrounds Vienna's historical centre, separating the Hofburg and Stephansdom districts from the rest of the city. It is home to a large number of the city's most symbolic architectural works.

Vienna was protected by fortified walls from the 13th century until 1850, when houses started to pop up outside the walls. In 1857, to create more space for the city, the demolition of the ancient walls began, and in its place the beautiful Ringstrasse boulevard was built.

The magnificent buildings that line this boulevard include the Hofburg Palace, the Rathaus, the Stock Exchange, the Parliament, the Burgtheater, the Votivkirche, the University, the Art History Museum and the Natural History Museum.

Sections of the Ringstrasse

The Ringstrasse is divided into different sections of road which form the ring around the city: Stubenring, Parkring, Schubertring, Kärntner Ring, Opernring, Burgring, Dr. Karl-Renner-Ring, Dr. Karl-Lueger-Ring and Schottenring.

Ringstrasse is one of the most beautiful streets in the city, and the location of many of Vienna's most important tourist attractions. If you don't fancy walking down the boulevard, another option is to explore it by tram. 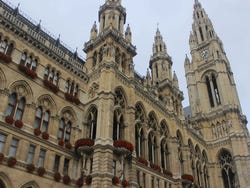