Inside the Capuchin Crypt, as it is also known, members of the Austrian royal family - including twelve emperors and nineteen empresses and queens - have been laid to rest since 1633.

Amongst the almost 150 sarcophagi in the crypt, the magnificently elaborate double tomb of Maria Theresia and her husband Emperor Franz I stands out, as do those of the beloved Empress Elisabeth and Crown Prince Rudolf.

The Capuchin Church, or Kapuzinerkirche, was constructed between 1622 and 1632. Unlike many royal burial sites, it is a relatively small church and monastery, still run by the Order of Friars Minor Capuchin, and is also very simple in both its interior and exterior architecture.

Burials still take place in the Imperial Crypt to this day. The last Empress of Austria-Hungary, Zita, was buried here in 1989, and in 2011 her eldest son, former Crown Prince and European politician, Otto Habsburg, was also laid to rest here alongside his wife, Regina.

The sarchophagi in the Capuchin Crypts, in styles ranging from Puritan plain to intricate rococo, are true works of art and testaments to both the power and personalities of those who have been laid to rest here. For more details surrounding the burial ceremonies and the architecture of the tombs, English language guided tours of the crypt take place between Wednesdays and Saturdays at 3.30 pm (€3 on top of the entrance ticket price). 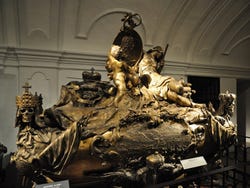 Sarcophagus in the Imperial Crypt 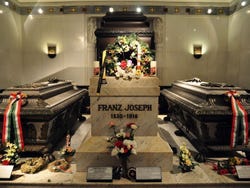 *Concessions include students between 19 and 26 years old, seniors older than 60 years old and people with reduced mobility, on presentation of valid ID.

Metro: Stephansplatz, lines U1 and U3.
Bus: Plankengasse, line 3A.