Located right in the heart of Vienna's city centre, not far from the cathedral, Peterskirche is a magnificent Baroque building inspired by St Peter's Basilica in Rome. While the current building dates from the 18th century, evidence shows that there has been a church in this spot for over 1600 years.

Over the years, several different churches have been constructed here: the oldest, of which nothing remains today, dates back to the Early Middle Ages. This then became a Romanesque building, before being destroyed in a fire in 1661.

The Baroque St Peter's Church that we see today was consacrated in 1733, and was the first domed structure in Vienna.

Despite its location in such a compact space, there is a surprising amount of room inside the church, which is richly decorated with golden stucco.

It boasts a magnificently ornate gilded pulpit, opposite which a dramatic gold and silver sculpture representing the Martyrdom of St John of Nepomuk commands attention. Thanks to this stunning collection of Baroque architecture, including the grand cupola painted with a fresco of The Coronation of Our Lady by Johann Michael Rottmayr, Peterskirche is considered one of the prettiest in Vienna.

With free entry and a location right in the heart of the city, this beautiful church is an must-see, especially for fans of Baroque art and architecture. Peterskirche also plays host to regular concerts and organ recitals: definitely worth a look for music fans. 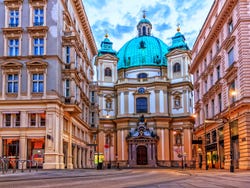 Peterskirche from the outside 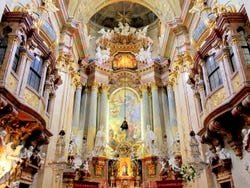 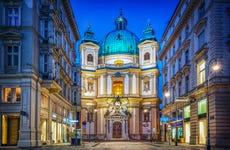