Located between Vienna and Budapest,  Bratislava, the capital of Slovakia, is a city that is often missed out on travels around Central Europe.

Situated on the banks of the Danube and divided in two by the river, Bratislava is one of the smallest capitals in Europe, with a population of less than 500,000.

Slovakia has been a member of the European Union since 2004, and they use the Euro there.

How to get to Bratislava from Vienna

If you don't want to hire a car, the main ways to get to Bratislava from Vienna are by going on a day trip or taking a bus, train  or boat.

What to see in Bratislava

Here are some of Bratislava's most important places to visit:

If you've got time and want to explore more of historical Bratislava, the Devin Castle is located 8 miles from the city centre, around a 30 minute journey on the number 29 bus from Novy Most (Most SNP). The ancient fortress is one of Slovakia's most important archaelogical sites and has played a significant role throughout the country's history, including being blown up during the Napoleonic Wars. Its Maiden Tower, a tiny watchtower perched perilously on a rock overlooking the Danube and Morava rivers, is a particularly photogenic spot.

In modernistic contrast with the city's historic centre, the Most SNP, also known as Novy Most or New Bridge, is home to a spaceship-shaped restaurant and observation deck. At 278 feet (85 m) in height, it offers excellent views over Bratislava.

How much time should I spend in Bratislava?

If you're staying in Vienna and you don't have plans to visit Budapest, the best option is to take a day trip to Bratislava. A few hours should be enough to explore the city's historic centre and enjoy a typical meal here.

If you're visiting Bratislava on the way to Budapest, it would be a good idea to spend a night in the city, allowing you to see the illuminated monuments, and, if you're in the mood for a party, to enjoy the Slovakian capital's lively nightlife. For the best deals on hotels in Bratislava, we recommend booking your accommodation here. 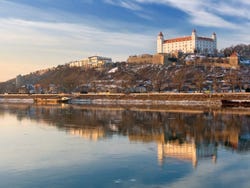 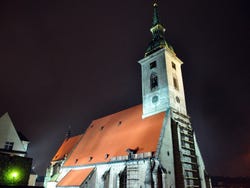 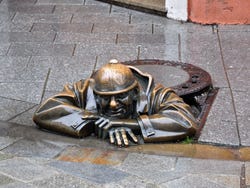 Statue of "Man at Work" in Bratislava 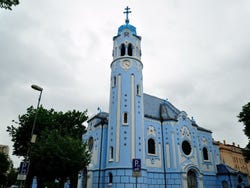