Vienna's tram network (Strassenbahn) is one of the largest in the world. It has 30 different lines covering much of the city centre, and in some areas they use underground routes. The tramway has been in operation since 1865; originally being pulled by horses, today the iconic red-and-white trams are powered by electricity.

Lines 1 and 2 are the most useful for tourists, as they travel around Ringstrasse and stop at some of the city's most beautiful buildings, including the Opera, the Hofburg Palace and the Parliament building.

The Vienna Ring Tranm is a tourist tram that circles all the way round the Ringstrasse without requiring you to change trams. Throughout the 25 minute journey, audioguides provide information all about the landmarks you pass in eight different languages, including English.

The tramway operating times are similar to that of the metro. While times do depend on each line, most start running from 5 am and stop at midnight. It's always best to check in advance, as certain lines only run until 9 pm or change their timings on weekends and public holidays. 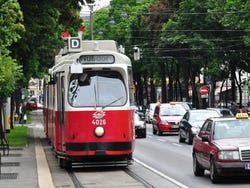